This product is produced by Medytox, in South Korea,
who manufacture it using an enhanced purification process.

Soraya Sabetian R.N. Performing Botulinum A Injections for a patient at her clinic in Auckland.

The History of Botulinum A Toxin

Neurologists and Eye Specialists have used Botulinum A Toxin in the treatment of facial and neck muscle spasm for many years.

It was noted that patients treated for these indications lost their “frown lines”.
About 1994 cosmetic dermatologists began using the Toxin to actively treat frown lines and later “crow’s feet” around the eyes.

The common areas injected are the glabellar frown lines between the eyebrows, lines that run horizontal across the forehead and crow’s feet from the corners of the eyes.

As time has gone on it has been realised that many of the facial muscles respond well to botulinum giving a rejuvenated appearance.

What is Botulinum A Toxin?

Botulinum A toxin is a protein produced by the bacterium Clostridium botulinum.

An infection with clostridium botulinum can be fatal as the large amounts of toxin produced by the bacterium can paralyse the respiratory muscles and cause asphyxiation. This is a form of food poisoning. However the tiny amounts of toxin injected for cosmetic or medical reasons do not cause asphyxiation and Botulinum A Toxin is one of the safest and simplest cosmetic treatments you can receive.

It has been widely used not only in the cosmetic field including facial wrinkle reductions but also in the therapeutic areas for patients with blepharospasm, cerebral palsy, muscle spasticity and irritability. The product is produced in strictly regulated conditions and although it contains a minute amount of human blood protein (Human Albumin) modern screening procedures reduce the risk of bloodborne diseases.

What is involved in a Botulinum A Toxin Treatment?

A full medical history will be taken prior to your procedure and you will have an opportunity to discuss the treatment in full with your Cosmetic Nurse. You will need to complete a consent form before treatment.

Minute doses of this Toxin are injected directly into the muscles which cause the dynamic facial wrinkles.

The treatment with Botulinum A Toxin aims to produce relaxation in the targeted facial muscles in order to smooth lines of the skin. Onset of relaxation within 4 to 14 days with the average time being 7 days. The effects lasts approximately 3-6 months, but will elongate with subsequent injections. Continuing for 5 to 10 years will have the effect of delaying the ageing process for many years to come. 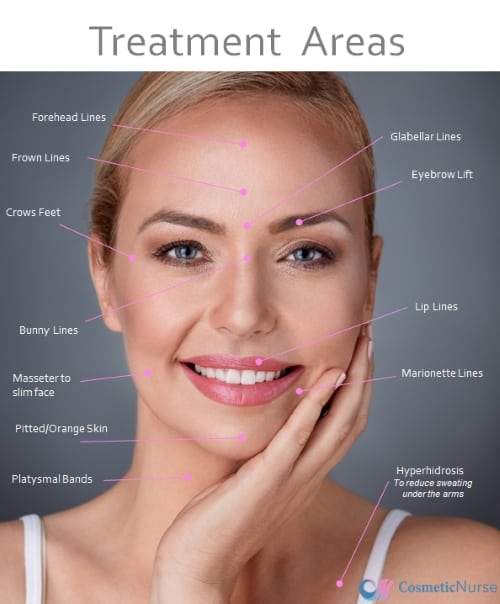 Do not have treatment if you are pregnant or breast-feeding or seek medical advice if you have a neurological condition that presents as a weakness.

Cost is dependent on quantity of toxin used, which varies for different areas. Price is based on a per unit basis. Total cost will be advised and agreed on the consent form prior to treatment being carried out. Remember this is an investment in your future and you will need to continue having treatment in the coming years to enhance and maintain the effect. It is best to consider an annual budget and discuss this with your Cosmetic Nurse Injector. Having said this if you decide to stop at any stage there is no compulsion and you will still be able to restart at a later date if you wish.